The Youngstown Press Club presents Jacob Schriner-Briggs, Yale Press Clause Fellow. Schriner-Briggs takes an in-depth look at the Press Clause of the U.S. Constitution's First Amendment, particularly the structural role a free press plays within democratic societies, both philosophically and through the eyes of the framers of the Constitution. What exactly did the framers mean by "freedom of the press?" What should it mean today? What are some of the obstacles currently faced by the American press and what, if anything, can constitutional law do to address them?

Jacob Schriner-Briggs is a 2017 graduate of Youngstown State University and a 2021 graduate of Yale Law School. After receiving his J.D., Jacob practiced law in the Media & Entertainment Group of Ballard Spahr LLP and helped represent journalists reporting at the local, state and national levels. He is currently the Press Clause Fellow at Yale Law, where he studies issues concerning press freedom and First Amendment theory.

"Who Cares? How to Write a Story That Gets Read"
Dorie Chevlen
New York Times and Wirecutter staff writer

Youngstown native Dorie Chevlen, New York Times and Wirecutter staff writer and award winning screenwriter, shares her insights into what makes a story hit home with readers.  What makes something interesting to a reader? Why should they care about something happening to someone else, somewhere else? And how can we as writers reach our readers at more complex levels?

Chevlen's nonfiction writing has been published by The New York Times, The Wall Street Journal, Glamour and Slate, among others. A fiction writer and screenwriter, her scripts have won or placed in multiple contests including Script Pipeline, Women’s Weekend Film Challenge, Final Draft Big Break, and ScreenCraft.

World Press Freedom Day is a day of support for journalists and other media professionals who have been killed between 2021 and 2022 in the pursuit of a story. The Youngstown Press Club commemorates the day with the Reading of the Names.
Lunch Speaker Series 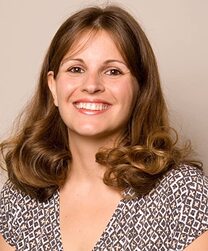 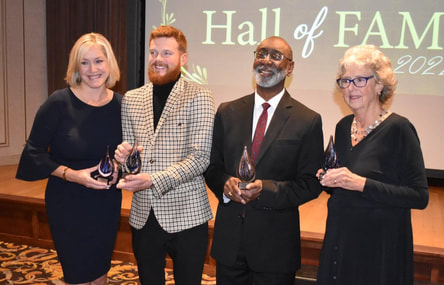 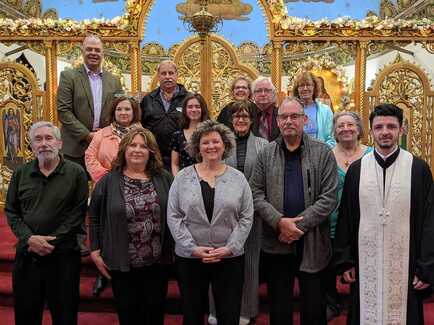 World Press Freedom Day is a day of support for journalists and other media professionals who have been killed in the pursuit of a story.

Thanks to Mykola Zomchak and Sts. Peter and Paul Ukrainian Orthodox Church for hosting this event.

​Video coverage by the Youngstown Business Journal is here. 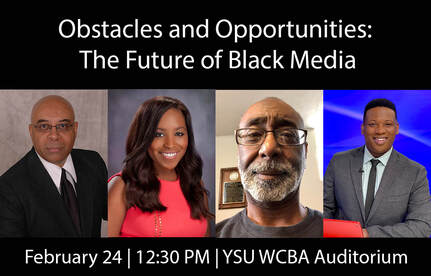 The Center for Community Media at CUNY’s Craig Newmark Graduate School of Journalism analyzed the coverage of nearly 100 Black-owned news outlets over 15 months between March 2020 and May 2021. In general, it found that Black media published as much as six times more coverage than mainstream outlets on issues of importance to Black communities, including racism, health disparities, and voting access.

“Many people speak of the importance of Black media in the context of history,” Black Media Initiative Director Cheryl Thompson-Morton said of the sector, which has been vibrant in communities across the country since the early 19th century. “This research shows why Black media is critical today. It provides data and backing of what Black media publishers have been telling us for years. My hope is that this report spurs more support and investment in the sector.”

The “Why Black Media Matters Now” report found that one in four articles in Black media mentioned racism or related issues, as compared with less than one in 10 in mainstream media. When COVID hit, Black media wrote five times more on the disproportionate racial impact of the pandemic and nearly twice as much on frontline and essential workers. Black media stood out in its focus on a variety of other health issues of particular relevance to Black communities, including maternal health, hypertension, diabetes, HIV/AIDS, and sickle cell disease. It also led the way in coverage of voting access, racism, and stories that humanize the individuals and groups in the news.

“When media scholars examine the importance of Black media, reports like this show a distinct ability to find parallels between modern day news events and historical injustices that mainstream outlets tend to ignore,” Earnheardt added. “This report found that Black journalists and media outlets are more likely than the mainstream media to humanize their stories by focusing more often on communities, family, men, women, and children”.

Ernest (Ernie) Brown was the regional editor for The Vindicator, Ohio’s eighth-largest daily newspaper, from 1986 to 2019. Now retired, Ernie accumulated a wealth of media experience over nearly five decades in the media profession. Along with serving as a reporter for The Vindicator, he was a junior high English teacher and an Adult Basic Education teacher for the Youngstown Board of Education. He got his start as an intern and general assignment radio reporter for WTVN Radio in Columbus.

Ernie has been recognized for his work by several organizations including Omega Psi Phi Fraternity Psi Omicron Chapter’s Person of the Year in 2016, Delta Sigma Theta Youngstown Alumnae Chapter for Political Awareness and Involvement in 2015, honorary co-chairman for the first African-American Male Wellness Walk/Run in 2013, and for community service by the Ebony Lifeline Support Group in 2012. He attended Youngstown East High School where he graduated with honors before heading to Ohio State University for a B.A. in Broadcast Journalism. He earned a teacher certificate in English from YSU.

Aaron Deane, WYTV
Aaron Deane is an anchor for the 33 WYTV evening newscasts, joining the team in April 2021. He serves as a weekday co-anchor for the 6pm, 7pm, and 11pm newscasts while producing the 11pm newscast. He develops and pitches story ideas, conducts live reports in the field, creates engaging content for website and social media platforms, and regularly communicates with WYTV viewers on Facebook, Instagram, and Twitter

A native of Roanoke, VA, Aaron is a 2016 graduate of Virginia Commonwealth University, where he obtained a bachelor’s degree in Mass Communications with a concentration in Broadcast Journalism. He was a member of the Phi Beta Sigma Fraternity, Inc. as well as the National Association of Black Journalists. Prior to joining the 33 WYTV team, Aaron worked as a multimedia journalist and fill-in anchor at WNCT in Greenville, N.C. Before his time in Greenville, he worked as a photojournalist for WFXR in Roanoke. In his free time, Aaron enjoys cooking, getting lost in a good television show, and listening to music, especially Beyonce. As a journalist, Aaron enjoys meeting new people, telling their stories, finding stories that may go untold and keeping balance and telling the truth. He strives to learn something new every day.

Malaynia Spiva, WFMJ
Malaynia Spiva is an Emmy Award winning journalist at 21 News - WFMJ. Spiva joined the 21 News team in 2016 as morning reporter for WFMJ Today and WFMJ Weekend Today. She is an alum of The University of Akron where she earned a Bachelor’s degree in Broadcast Journalism in 2012.

During her time in Akron, Malaynia was a disc jockey at z88.1 FM, and a year after graduating college she became the owner of an online travel publication that featured events and entertainment for the state of Ohio. Malaynia is from the Valley, a Warren native and a Howland High School graduate.

Arthur (Art) Byrd worked as a video photojournalist at WFMJ TV 21 where he shot and edited news and sports footage for the three daily newscasts. While at WFMJ, he and a colleague received a 2002 first place award from the Ohio Associated Press for “Best Investigative” reporting for a television news story called “Missing Money.”

He is a former instructor at YSU teaching “The History of Motion Pictures.” While at YSU, he taught several telecommunication courses and was the program coordinator of the practicum program where students designed their own communication projects. Arthur is a graduate of YSU with a B.A. in Telecommunications and a minor in Criminal Justice and an associate degree in Applied Business. He is a member of the speaking and leadership club, Toastmasters, which has clubs worldwide. Arthur belongs two local clubs: Executive 408 Toastmasters Youngstown and Warren Toastmasters. He earned the title of Distinguished Toastmaster, the highest honor in Toastmaster education. 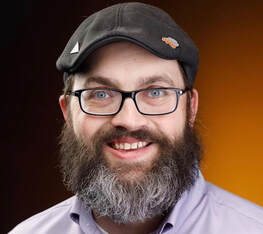 Dr. Shane Tilton, , author of Meme Life, is an associate professor of multimedia journalism at the Ohio Northern University. Tilton is also a Fellow for the Ohio Northern University Institute for Civics and Public Policy, the Leyline Geek Therapy Advisory Board, and the Center for Society and Cyberstudies. He was named the 2018 Young Stationers’ Prize for his work advancing journalism and communication scholarship and education in United States higher education for nearly two decades. Tilton was honored twice by the Society for Collegiate Journalists as his work advising the Northern Review, the campus newspaper. His latest award happened in 2018 when he was named the Sheridan Barker Advisor of the Year. Tilton’s research normally falls in the realms of collegiate game-based pedagogy, the psychological issues surrounding ludology, multimedia journalism’s influence on society, social media engagement, and memetic communication practices. His work on social media and its connection to university life earned him the 2013 Harwood Dissertation award from the Broadcast Education Association. 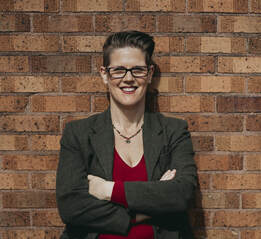 Feldkamp is a wife and mother of three kids, and an award-winning columnist from northern Kentucky. Her most recent award came from the National Federation of Press Women, and in 2021, she earned first place in the editorial/opinion category for the third year in a row. Her columns often seek to understand how current events and family life intersect. She ties personal experiences to social issues to help readers empathize, relate and care.

She is the media director for the National Society of Newspaper Columnists, a member of the Cincinnati Enquirer editorial board and a board member of the Greater Cincinnati Society of Professional Journalists. An avid conservation enthusiast, she serves on the board of the Fort Thomas Forest Conservancy. She is a believer of the importance of strong community resources of which journalism is vital.

More information about Feldkamp is at WriterBonnie.com.
World Press Freedom Day - Reading of the Names
May 3, 2021

World Press Freedom Day is a day of support for journalists and other media professionals who have been killed between 2021 and 2022 in the pursuit of a story. 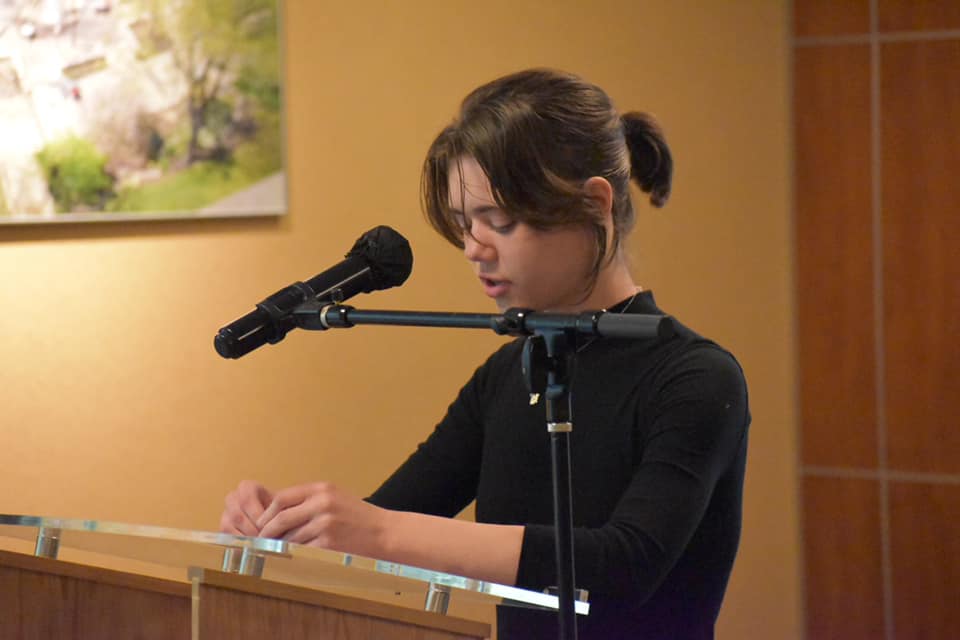 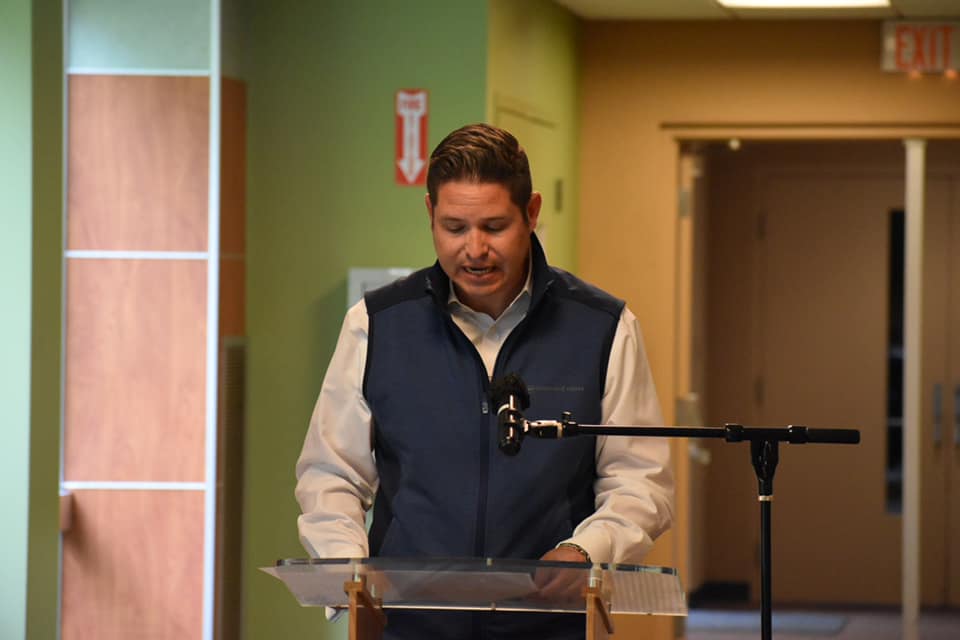 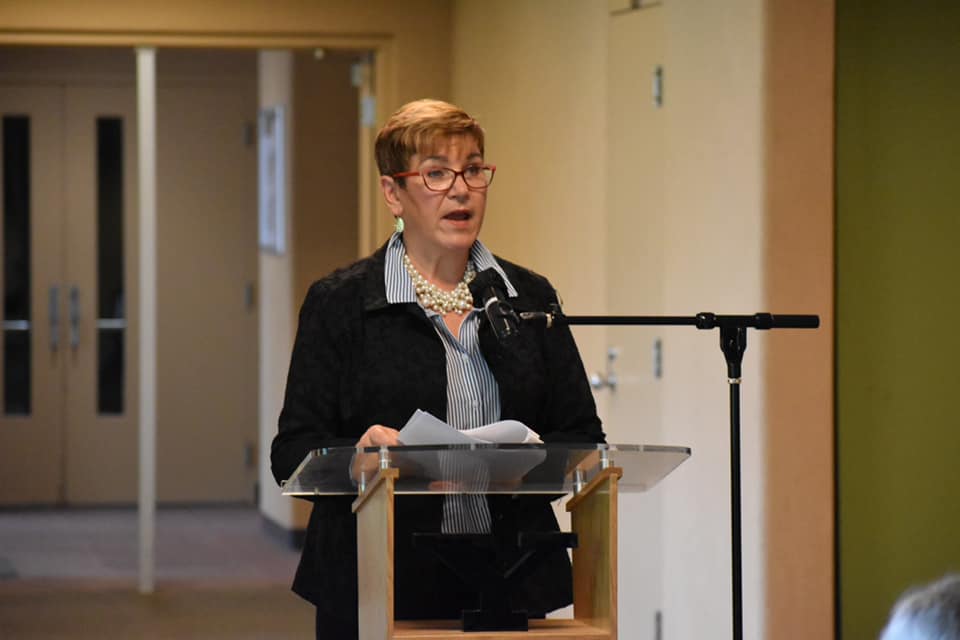 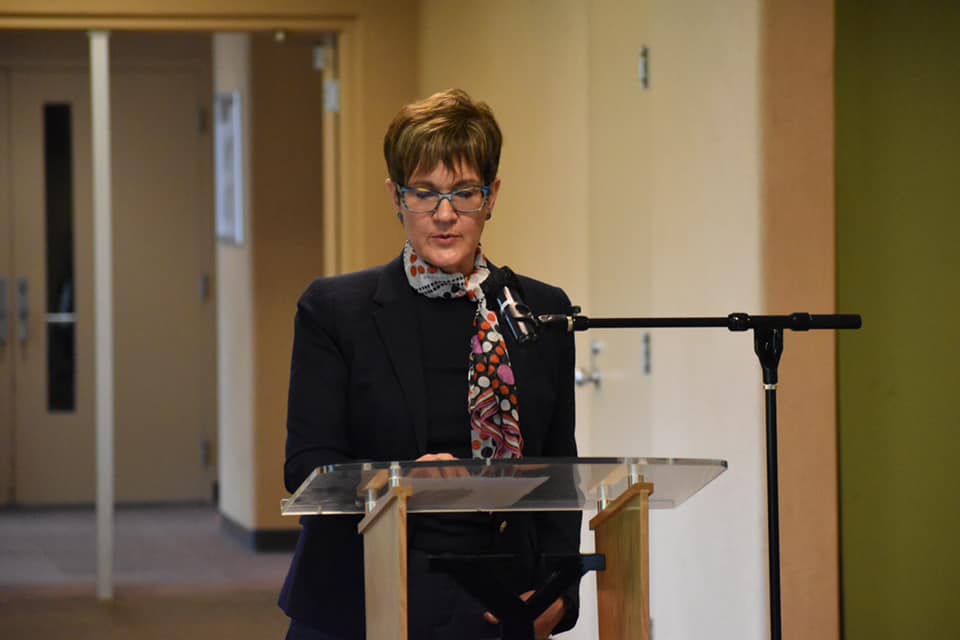 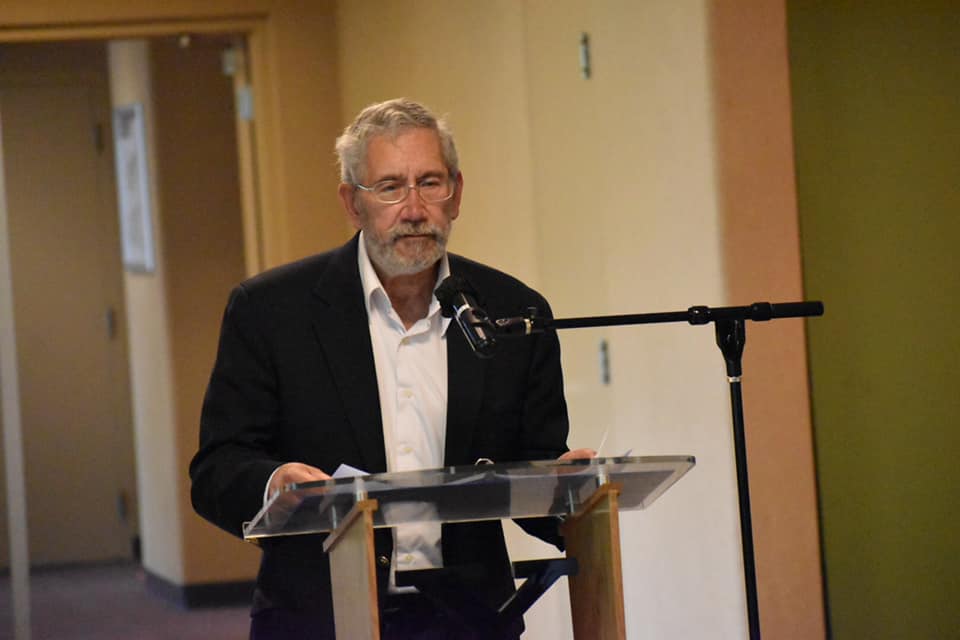 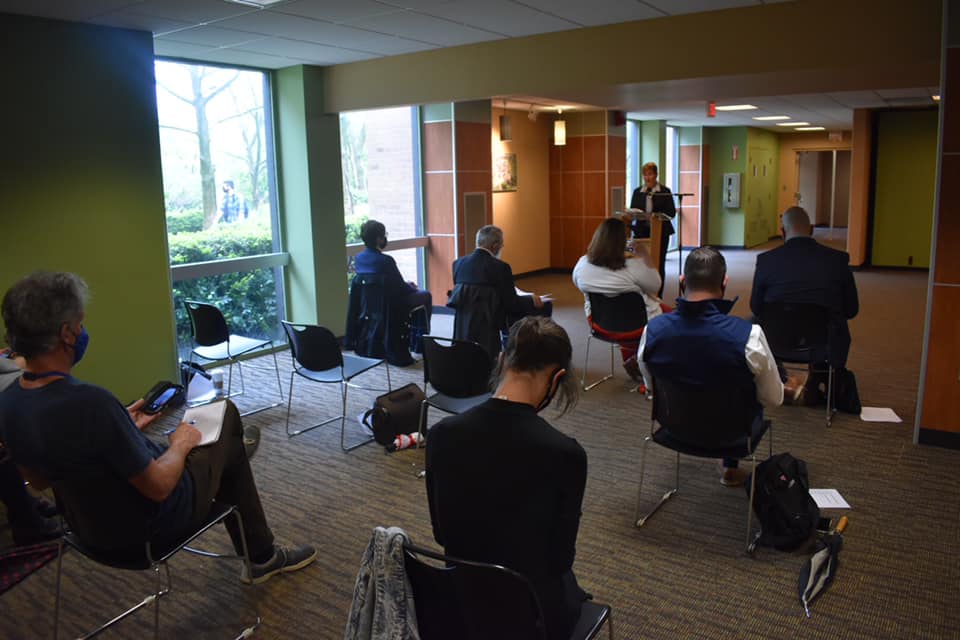 The Youngstown Press Club thanks The. Business Journal and  Pecchia Communications for their support as institutional members. ​